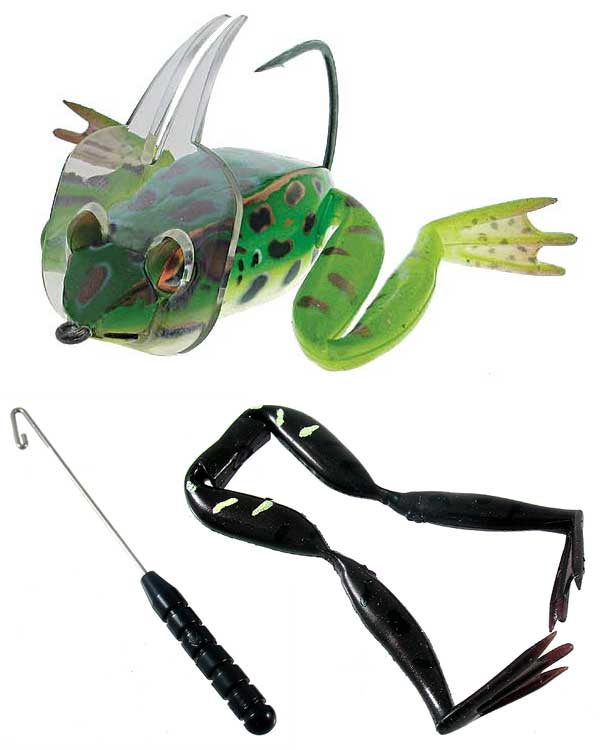 For over 100 years anglers have been making lures they hoped would imitate frogs. Many look just like a frog. When they’re sitting still that is.

But when put into motion in a dynamic state, most do nothing but skim over the surface like a water ski. Others plow clumsily through the water and attempt to appear alive. They might kind of "look" frog, but they don’t DO frog!

Until now that is. The Dahlberg Diver Frog does frog. In spades.

Give it a pull and it dives, creating a soft bubble chain with its legs kicking behind it just like a real frog. Stop, its legs retract, and it rises slowly until its eyes poke out above the surface. You’ll swear it's real.

In the shallows, you can swim it down into the bottom, shake it a little, let it rise an inch, nose it back, kick up some dust to get their attention, then let it slow rise all the way back to the surface. It will amaze when you see it in action.

Oh yes, its unique "overhead" diving collar with built in weedguard and "hook up" design allows it to skip over vegetation with the best of ’em.

The Dahlberg Diver Frog can slide over junk, pop and rest in a hole, do any combination of popping and swimming along edges or nose in to the bottom like a frog trying to hide in the mud.

It’s irresistible. Comes with one frog and one extra set of legs.

We do not have any videos for this product yet