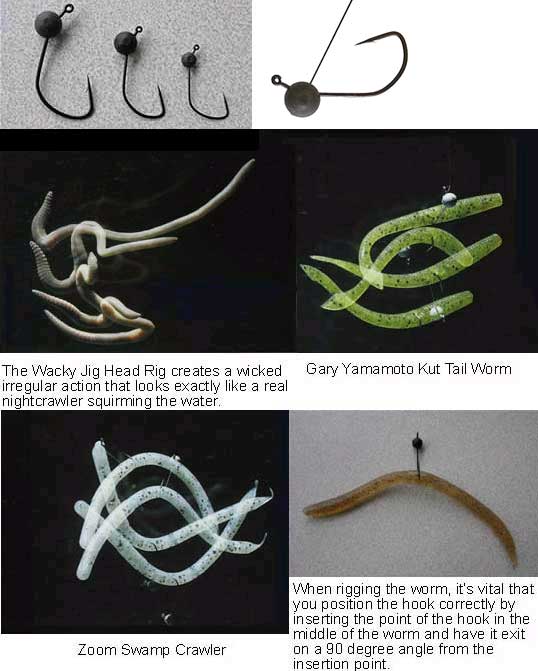 The Japanese anglers are a very studious bunch. They are always working on new and creative techniques. The drop shotting technique that the Japanese introduced to America several years back has become a household term in bass fishing recently, and now the Japanese have created a new technique called “INCHI WACKY” or Jig Head Wacky. This technique has taken Japan by storm over the past 12 months and for good reason. Two Japanese Bass Pros, Takuma Hata of Zappu Inc. and Toshiro Ono of Jackall Inc pioneered the craze.

As the name suggests, it’s a very straightforward rig and easy to put into practice.

Benefits of the Rig
1. You can get more distance on the cast.
2. You can fish deeper areas.
3. The bait falls quicker.
4. You can keep in contact with the bottom easier.
5. Most importantly it creates a wicked irregular action that looks exactly like a real worm squirming in the water.

Why It Works
The Japanese anglers firmly believe that this irregular action has a very appealing – teasing action that bass cannot resist. Both Hato and Ono believe this bait is ideal for fishing deeper water and tougher conditions. Areas such as rock piles, drop offs and other vertical structure points are perfect situations where the “Jig Head Wacky Rig” will produce.

Japanese will always say that you have to have an image in your head of what you want the jighead and worm to be doing. The ideal image you want to see is the ball part of the jighead going flip flopping up and down and that’s it. If the jighead is doing that, then the worm will be doing its thing. The great thing about this rig is that you can create so much action in the worm and the worm doesn’t even have to be moved in at all. Otherwise saying you can keep the bait exactly where you want it to be and stay there.

The How To
In order to do this, there is a secret, and that is keeping a good amount of slack in the line. By keeping slack in the line you can shake your rod constantly to produce the wicked irregular action and still keep your bait exactly where you want it.

When fishing bottom structure you will want to cast out the Jig Head Wacky and let it free fall to the bottom. While the jig falls the weight from the jighead causes the worm to roll back and forth. After it hits the bottom you will want to shake it and continue to wind up slack and then free fall it back to the bottom. Remember that this is an exposed hook so this is not a deadsticking technique. Leave that type of fishing for your regular weightless wacky rig. The fish will often attack as the bait free falls after you shake it.

The Jig Head Wacky is also very effective on suspended fish in mid water. The key in working this bait is again the slack in the line. You will want to cast the line out and as you reach the area the fish are holding in you will want to slowly shake the bait and as you swim the jighead back in.

The Rigging & Tackle
Like with all techniques, the tackle you use plays a huge role in the outcome. The key to the “Jig Head Wacky Rig” is in the rigging. When rigging the worm, it’s vital that you position the hook correctly by inserting the point of the hook in the middle of the worm and have it exit on a 90 degree from the insertion point. This is so the worm is fixed good and tight on the hook and it makes for a better irregular action. The Japanese have experimented with different hooks and have found that a V shape angled hook keeps the worm permanently fixed on the hook. The most commonly used jig head weights are 1/32oz to 1/16oz but vary upon the size of the worm and the depth at which being fished.

When using the Jig Head Wacky Rig, the Japanese anglers like to use fast tapered rods that are rated light to ultra light. A popular length in Japan is 6 foot because they feel it’s easier to handle lighter worms with a shorter stick. 4-pound fluorocarbon line on a spinning reel is also the choice for many Japanese anglers who have mastered the Jig Head Wacky Rig. When working the rod, it is vital to keep a good rhythm and a constant up and down speed in a 10-11 o’clock positioning. Recently pro anglers are even using a 3/8-1/2 oz football shaped jig around heavy rock area and have said that slowly dragging the bottom is also very effective. The most popular used worm styles for “Jig Head Wacky” consists of Zoom’s swamp crawler, Jackall’s Flick Shake, Gary Yamamoto’s Cut Tail, Optimum Bait’s Twin Teaser, and Berkeley’s Gulp Wacky Crawler.

Weedless Inchi Wacky
Zappu's "Inchi Wacky" is now available to the U.S. angler in a 1/16 oz size that features a brush guard. Now you can fish your worm Jighead wacky style tighter to the structure without the fear of getting caught up right away. The smaller size jighead also allows for a more finesse approach. 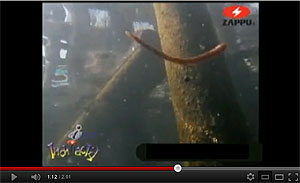