Every tattoo tells a story. The ‘ink,’ as the street calls these permanent markings, are individual works of art, indeed. Artisan bass angler Mike “Ike” Iaconelli has offered his unique talents to assist in the development of a masterpiece series of lures that are destined for tournament success.

There are three key traits that make Ike’s Custom Ink DT-Series more natural, more fresh-to-the-fish than anything else with treble hooks and a bill. First, it’s their purposefully muted colors. Before these baits came along, Ike used to “bake them in the sun” on his Toyota’s dashboard, even line his windowsills with body-baits for months to get that lifelike, muted skin tone.

Typical crankbait colors, says Ike, sometimes need to be toned down, made more subtle to mirror reality. The subtler colors can be fantastically effective when bass aren’t attacking conventional patterns, too.

Next, Ike had Rapala polish the finishes like the translucent candy apple red on a ’57 Chevy. Pearly finishes are native to numerous baitfish species, namely shad.

For the third pivotal ingredient, Ike went super sparkly… with glitter. Not just any glitter, but super fine sprinkles that actually add depth to the appearance of the lure. Tediously worked into the final cosmetics of Ike’s Custom Ink DT-Series, the reflective dust particles again aimed to emulate actual baitfish.

At the end of the day; end of the tournament; business end of the microphone up on the podium with The Cup clutched in hand; it’s about “using something different, something unique to catch more fish.” Hey, Ike…Rapala couldn’t agree more. Nor will the curious crankers who put these pre-worn, intentionally subdued, favorably-faded baits to work.

Those old worn out waters and so-called ‘conditioned bass’ have been waiting for a change. Well, it’s here.

Rapala DT Series lures all dive faster and stay in the strike zone longer than any other crankbait on the market. DT Series lures are made from the top seven percent of select balsa wood. Perfectly consistent wood combined with carefully placed internal weights, a tapered fuselage and a thin tail creates the ultimate crankbait action. 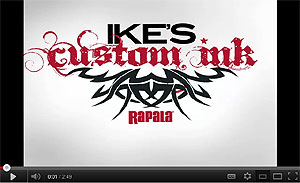