The Slither K was designed to be fished in the thickest cover and structure imaginable. The unorthodox body profile and balancing system were strategically calculated to make the Slither K a standout in a crowded marketplace. The cupped sides create an overwhelming presence in the water by producing an incredible amount of turbulence. The center weight positioning makes it exceptionally simple to work. With a continuous retrieve, this lure will walk the dog and create short quick turns unlike any other lure on the market. The speedy side to side action over all forms of cover will trigger hunger strikes from even the most finicky bass. The super soft material combined with the custom precisely-angled hook make the Slither K extremely weedless. At the same time, it has an excellent hook up ratio. If frogging is your game, then the Slither K is a must for your arsenal.

Body Form see figure 1
The Slither K is designed with a flat belly to control the amount of rolling, thus facilitating sharp quick turns. Combined with its cupped sides, the design forces water away, creating incredible disturbance. This allows the bait to establish its presence and make itself known for nearby bass. The rear portion of the bait has two evenly distributed holes so the air within the body is quickly released, ensuring a solid hookset while also automatically releasing water on the cast. There is no tuning necessary with the Slither K. It's ready to rock and roll right out of the package!

Quick Walking Dog see figure 3
The Slither K is designed to be fished with a constant retrieve and rhythmic twitch. This creates a non-stop dog walking action that mimics bait fleeing for their lives. It converts lethargic bass into the more aggressive ferocious eating machines that all anglers love to chase down

Rabbit Fur Tail see figure 2
The natural feel and appearance of rabbit fur adds an extra element of natural appearance to the lure as it slithers back and forth on the surface. It creates subtle movements and undulations that can only be produced from a natural material. As an added bonus, as the hair gets wet the extra weight from the water makes it more wind-resistant and allows for longer distance casts.

Weight Setting see figure 4
The weight is positioned in the center of the belly rather than toward the rear, as is seen in most lures in its class. This allows the bait to lay flatter and also submerges it a little deeper, thereby enabling a quicker response when twitched and pushing more water as it walks. 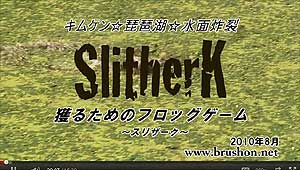